Welfare and the Mises Dilemma

It is usually thought good for someone who has more than enough to help someone who has less. It is not so obvious that it’s good for one person to take from a second to give to a third who may be in need. Yet that is what government welfare entails: forced taking from one group of people to give to another group. Welfare like this may serve a larger social end, but it rests on uncertain moral ground. I believe that it is also likely to fail on practical grounds. Welfare is another example of what I have called elsewhere the malign hand.

The immediate effect is the relief of poverty. This is obviously good. A mother who cannot afford food may now eat, a child with tattered clothes can get better ones, and so on. But if welfare payments become regular and predictable, there will be long-term effects that depend on the rules by which welfare is allocated, on what behavioral psychologists call the reinforcement schedule that has been set up. There are two reinforcement schedules to consider: the schedule that affects welfare recipients, and the schedule that affects those who make welfare decisions, the welfare bureaucrats.

Let's look at the recipients first. In the old days, charity was supposed to go only to deserving recipients, to people who were in need through no fault of their own. The criterion was basically a moral one, but to the extent that it was followed, it discouraged ‘welfare dependence,’ the long-term, malign-hand effect of welfare. If only the deserving get benefits, slackers and crooks will not be rewarded and undesirable behavior will not be encouraged. Not everyone agrees with ‘welfare only for the deserving,’ of course. Christians concerned with ‘social justice,’ for example, might point to Matthew 7:1: “Judge not, that ye be not judged” as an argument against almost any criterion-based welfare system. But Jesus also said, later in the same chapter, “by their fruits ye shall know them” suggesting that he would not have encouraged a failure to judge that led to welfare dependency. Believers in equality of outcome as an absolute good see no need to justify taking from the richer to give to the poorer. But even if we accept the traditional idea that aid should go only to the deserving, problems remain.

First of all, there is an information problem: how do those who allocate welfare know who is deserving and who is not? Founder of the Austrian School of economics Ludwig von Mises many years ago pointed out the central flaw in socialist economic planning: that no central authority has the information necessary to properly allocate resources and products . The Soviet economy, with its long lines of consumers in search of necessaries like toothpaste and toilet paper, together with huge overproduction of some things, like steel and armaments, is a textbook illustration of the failure of central economic planning. The only solution, said Mises, is some form of market economy in which the demands of numerous individual consumers and the supply capabilities of many producers together determine price and availability of goods.

The situation is much the same in welfare. Even if we ignore for the moment the malign hand affecting welfare bureaucrats themselves, they also have an insoluble information problem. Given that the number of welfare allocators must be much smaller than the number of welfare recipients, given that they constitute a bureaucracy that must operate according to rules, and given that their knowledge of the personal circumstances of each recipient is necessarily limited, there is simply no way they can allocate benefits in a truly just way. Instead of real personal knowledge, they must rely on a set of rules which themselves will set up destructive reinforcement contingencies and be susceptible to ‘gaming.’

For example, in Britain, for many years unmarried mothers – ‘lone parents’ – have been eligible for benefits denied to married mothers in similar economic circumstances. In 2002 a UK Civitas report commented:

The government and most people declare support for stable family relationships; they also recognize that two-parent families provide the best life chances for children and the best chance to avoid long-term dependence on state welfare. Yet the government’s attempt to reduce the poverty of lone parents and children through cash awards and work incentives actually discourages low-earning parents from forming committed two-parent families.

Given these incentives, it is no surprise that the number of babies born to unwed mothers has increased enormously over the past several years, in the US as well as the UK: “About 1.7 million babies were born to unmarried women in 2007, a 26 percent rise from 1.4 million in 2002 and more than double the number in 1980, according to the new report. Unmarried women accounted for 39.7 percent of all U.S. births in 2007 – up from 34 percent in 2002 and more than double the percentage in 1980…. ‘If you see 10 babies in the room, four them were born to women who were not married,’…” reported the Washington Post in 2009. The state is after all a more reliable spouse than most young men, especially if the young men and their mates know that their support is not essential.

This trend does not alarm welfare advocates. Adapting to a generous malign-hand reinforcement schedule that has now existed for several decades they, and indeed most European citizens, now regard these kinds of payment as a right. Archbishop of Canterbury the golden-voiced Rowan Williams in an extraordinary article criticized budget-balancing welfare policies initiated by the new UK coalition government in 2011 as a “quiet resurgence of the seductive language of ‘deserving’ and ‘undeserving’ poor” implying that making this distinction is somehow wrong. Reacting to a 2007 UK report advocating new welfare restrictions, welfare advocates can write things like “If the proposals from the recent … review are accepted, the idea that lone parents are entitled to benefits on the basis of their role as a parent will be eroded, and may ultimately disappear from the social security system.” (my italics) In other words, these folks are treating a child as something like a natural disaster that has befallen the mother. The welfare mother is to be treated as a victim of an event – in this case conception – over which she had no control.

All sorts of justification are offered for this attitude, but perhaps the most popular highlights the paramount importance of the child’s welfare. The lone parent must be helped else the child will suffer. In short, children are treated like hostages to be ransomed by the state. National Lampoon magazine captured this logic well in a famous cover several years ago. 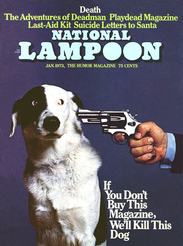 Nevertheless, as the Civitas comment pointed out, giving generous welfare benefits to lone parents is likely to create more such children, not fewer, in the future. Present good for a few leading to future harm for many – the malign hand.

The malign effects of the welfare system on other lifestyle choices are harder to see than the ‘lone-parent trap’, as the Brits call it, but they are none the less real. Even in the case of payments for disability, something which, one might think, is pretty easy to assess, fraud is common. Stories like this one are not infrequent in the British press: “An amateur dancer who swindled taxpayers out of nearly £20,000 in disability benefits was spared jail today, after a judge heard how his passion for jazz and swing led to regular performances at care homes.”1 The violent demonstrations in late 2010 by British students protesting an increase in college fees shows the sense of entitlement that a long history of freebies engenders. The ante was upped by country-wide UK riots in the summer of 2011. The rioters were predominantly young people, well-trained to entitlement.

Those who administer welfare also work under a malign-hand reinforcement schedule. First, any agency that exists to solve a problem, be it poverty or pollution, will always have an incentive to find it. What do you think would be the reaction of the Environmental Protection Agency if the US were suddenly to find itself pollution-free, for example? Would the public servants thus rendered redundant cheer and collectively resign? I don’t think so! Well, we are unlikely to be without either pollution or poverty for a while, because the closer we in fact get to eradicating either, the lower the bar defining them will become. For pollution, it is very low indeed, with the EPA now attempting to regulate carbon dioxide, a natural constituent of the atmosphere exhaled by every living animal. Radon testing has now become a hazard for house sellers despite the fact there is essentially no causal data linking the very low levels of radon in dwellings to human health.

The same agency-justifying end can be achieved for welfare by defining poverty in relative terms. The definition of poverty “in the OECD and the European Union is 60% of national median equivalised [sic] household income.”2 This is a definition not of poverty but of income inequality. No one seems to have noticed that a definition like this ensures that poverty is unlikely ever to be eliminated. Welfare agencies seem quite happy with this kind of definition.

Individual welfare bureaucrats also operate under a destructive schedule. In the UK, for example, the emphasis is not so much on judging the applicant as finding all the benefits for which he or she is eligible. And why not? It’s not the bureaucrat’s money, and the more need a department can demonstrate, the larger its claim on the public purse. Parkinson rules! Remember, the practice in most bureaucracies is to spend all your money every year, else your budget may be cut.

Retrieved from "https://psycrit.com/w/index.php?title=User:Jers/blog/2012/05/06/1539/Welfare_and_the_Mises_Dilemma&oldid=2784"
... more about "Jers/blog/2012/05/06/1539/Welfare and the Mises Dilemma"
RDF feed
Author
User:Jers +
Page type
Blog post +
TextAbove
It is usually thought good for someone who … It is usually thought good for someone who has more than enough to help someone who has less. It is not so obvious that it’s good for one person to take from a second to give to a third who may be in need. Yet that is what government welfare entails: forced taking from one group of people to give to another group. Welfare like this may serve a larger social end, but it rests on uncertain moral ground. I believe that it is also likely to fail on practical grounds. Welfare is another example of what I have called elsewhere the malign hand.</br></br>Welfare has two effects:he malign hand]. Welfare has two effects: +
Title
Welfare and the Mises Dilemma +
Topic
User:Jers/malign hand +, Government welfare +, Poverty +  and Socialism +
User
Jers +
When Posted
15:39:00, 6 May 2012 +